Posted in Facts Of Life 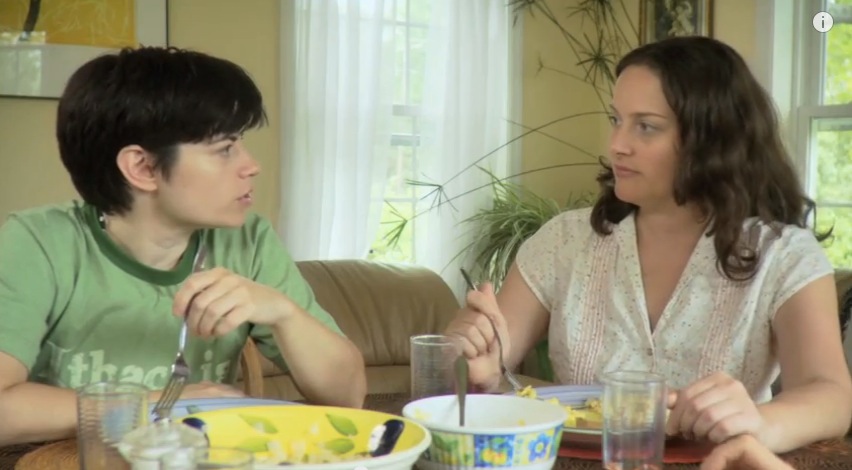 Stop what you’re doing and go watch this endearing short film about a girl with two moms learning about her creation. The daughter is played by Bea Miller, who went on to a top-10 spot on The X Factor and has two moms in real life!

Filmmaker Becky Lane made “Hens and Chicks” in 2010. It made a run of over 100 film festivals worldwide, and won the Best Short Film audience award at the Barcelona International Gay and Lesbian Film Festival and The Mary Elisabeth Knight Award (Special Award for Best Local Film) at Rochester’s ImageOut LGBT Film Festival.

after which, Lane told me, “I moved on to my next projects and set it on the shelf.” Now, she said, “I thought that this film could be distributed online and be helpful to many parents and kids out there. I want it to get out in the world. I have it free on YouTube, and also have DVDs for sale and commercial free streaming options for those who want to support my work. But the first goal for all my films is to let people see it.”

The film focuses on a young girl, Hanna, being raised by her two moms.  She’s known that families come in all types, but has never really thought about the details until her friend Marco explains the process of creating chicks from eggs. That, plus a little Web surfing has Hanna asking, “Who’s my rooster?”

The film is less about the mechanics of assisted reproduction, however, and more about the meaning of family and the finding of self. It’s sweet and funny and could be a great way to broach the topic with your own kids.

The young actor who played Hanna, Bea Miller, is now a 15-year-old pop singer with several singles out and an album, Not An Apology

, due in July. She has two moms, although they separated in 2012. Lane noted, “When they saw the script they really wanted Bea to do the film. Lucky me … I could never afford her now!”

“Hens and Chicks” is Lane’s first film. She’s a sociologist by training, and also worked for Billie Jean King’s Women’s Sports Foundation as the media producer.  She explained, “I was laid off during the economic downturn of 2005. That and 9/11 made me realize that (1) life is short  and fragile, and (2) nothing is permanent—if I had dreams of my own it was time to explore them. . . . I decided that I wanted to tell stories that were meaningful to me.”
About the film itself, she told me:

I really hope that this can be a gentle and entertaining tool for parents—all parents, not just LGBT ones, to educate children about different types of families and also start discussions on reproduction.  I also hope that people just enjoy the film for what I intended it to be:  a humorous and heartwarming look at being young and innocent and asking basic questions–and how these questions can raise emotions in the adults surrounding them.

She explained further in her director’s statement:

Many people have asked me where I got the inspiration to create “Hens and Chicks.” It’s a long story … but basically I started thinking a lot about my friends who were choosing to have children. Some were using sperm or egg donors. I wondered about the thoughts and feelings of all parties involved—parents, donors, offspring—and the people close to them. I wondered how donor-conceived offspring deal with often times not knowing much about the person who has contributed 50% of their DNA. I wondered how I would feel if I had donated an egg to create a life…and that I might never know that person. I wondered how parents choose who to create a life with when all they may have is a list of answers to a long questionnaire and a small photo. And I wondered in the end…does any of this really matter?

So … I started asking questions. And I started reading. I quickly discovered that there are so many more answers than questions, and that everyone—from all sides of this process—has a wonderfully unique, interesting, and personal story to tell. I made “Hens and Chicks” to add another voice to the mix, and I hope that it resonates with people no matter what type of family they come from.